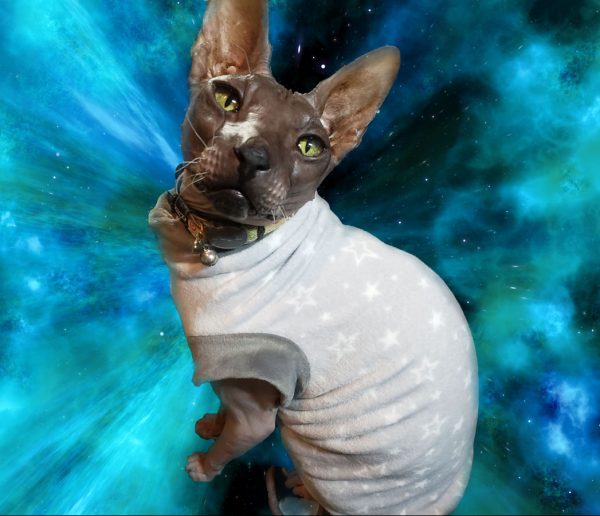 Being a Pawsmonaut means exploring so many things out among the infinite stars. The milky way sounds exciting. Maybe they have fuzzy blankets and catnip and treats there too!

Being a Pawsmonaut means exploring so many things out amongst the infinite stars. The milky way sounds exciting. Maybe they have fuzzy blankets and catnip and treats there too!

This unbelievably snuggly Sphynx top is made of stretch plush…a kitty comfort favorite! It features white star shapes strewn across a background of soothing grey.

The body of this shirt is made of unbelievably blanket soft, comfortable stretch plush spandex material. The trim is made of butter soft stretchy micro fleece in in your choice of solid black or grey.

Scientists recently identified the oldest material on Earth: stardust that’s 7 billion years old, tucked away in a massive, rocky meteorite that struck our planet half a century ago.

Stars have life cycles. They’re born when bits of dust and gas floating through space find each other and collapse in on each other and heat up. They burn for millions to billions of years, and then they die. When they die, they pitch the particles that formed in their winds out into space, and those bits of stardust eventually form new stars, along with new planets and moons and meteorites. And in a meteorite that fell fifty years ago in Australia, scientists have now discovered stardust that formed 5 to 7 billion years ago — the oldest solid material ever found on Earth.

There are no reviews yet.