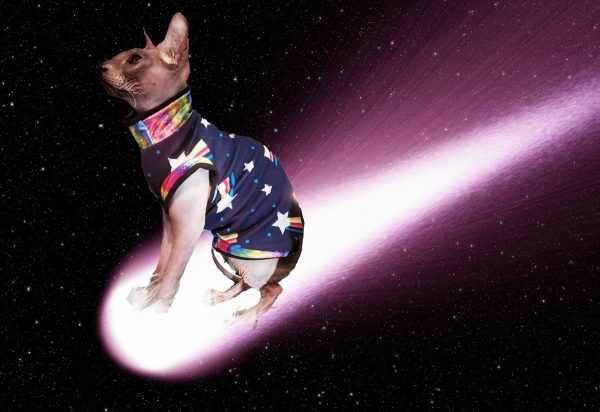 Your ship is in orbit above the planet Venus. Your paws bump the controls, as you start in surprise. Through the window you catch a glimpse of a glory! A rainbow in space? Yes! You might be the first Pawsmonaut to ever view this phenomenon! You love it so much you want to wear it on your space suit.

Your ship is in orbit above the planet Venus. Your paws bump the controls, as you start in surprise. Through the window you catch a glimpse of a glory! A rainbow in space? Yes! You might be the first Pawsmonaut to ever view this phenomenon!

This Sphynx tee dances with shooting stars. Each star comet leaves a trail of bright cheery rainbows. The stars are highlighted with shimmering silver! (we use materials that shed very little metallic if cared for properly, and we never use glitter that is unsafe for sensitive Pawsmonaut kitties’ eyes! )

The body of this shirt is made of soft, comfortable t-shirt worthy cotton spandex jersey material. The trim is made of cotton stretch jersey in in your choice of solid black, pink, red or sky blue, or black-backed silver metallic or RAINBOW metallic!  The metallic trims are split and have cotton behind them so that the metallic looks fabulous but does not touch your kitty’s sensitive skin.

*please note: pics of the sample on the cat are of the binary style

Space fact: For the first time, a spacecraft has imaged a rainbow-like feature known as a ‘glory’ on another planet.

A rainbow-like feature known as a ‘glory’ has been seen by ESA’s Venus Express orbiter in the atmosphere of Earth’s nearest neighbor – the first time one has been fully imaged on another planet.

Rainbows and glories occur when sunlight shines on cloud droplets – water particles in the case of Earth. While rainbows arch across wide swathes of the sky, glories are typically much smaller and comprise a series of colored concentric rings centred on a bright core.

Glories are only seen when the observer is situated directly between the sun and the cloud particles that are reflecting sunlight. On Earth, they are often seen from airplanes, surrounding the shadow of the aircraft on the clouds below, or around the shadow of climbers atop misty mountain peaks.

A glory requires two characteristics: the cloud particles are spherical, and therefore most likely liquid droplets, and they are all of a similar size.

The atmosphere of Venus is thought to contain droplets rich in sulphuric acid. By imaging the clouds with the sun directly behind the Venus Express spacecraft, scientists hoped to spot a glory in order to determine important characteristics of the cloud droplets.

There are no reviews yet.